I had a thought of actually explaining rationally exactly why I have been infatuated with Starlight Glimmer, and she has been a major subject of controversy in the fandom from the reception of her character. I feel the need to articulate my esteemed fondness of her, in a light where I would attempt to consider all sides of the argument to ultimately make up what I, personally, think of her as a character and how she has developed in the series. Needless to say, it’s a positive outcome - and if you don’t like this character, I invite you to read along, or send a tweet at me to discuss about different perspectives in approaching her characterization.

I had a discussion some time ago, and here is her primary merit in my opinion: She is a character always constantly reminded of her past and her failure, who kept making mistakes, but picked her way up from doing something that she did out of anxiety, desperation, and plight. You can definitely cite how her character has been pretty repetitively taunted, and lazily evaluated by allowing her to just make mistakes after mistakes which are avoidable, but isn’t that exactly what makes her so, for lack of a better term, human?

I have to agree her redemption arc exclusively in S5E25-26 isn’t the most well orchestrated session due to time allotments, but her assiduous struggle to reform, while still being pulled incessantly by her past self’s ways of thinking in S6-S7 justifies it. She’s always reminded of her past either by passing, by herself, as humor, or as a reference point of her decisions. With the magnitude of relative wrongdoings she realized she has done, this is no easy feat.

I’ll take a sidebar to comment on the legitimacy of her political or ethical orientation, which I think can be used by anyone critical enough to counter any of my points in this long rant. I will advise that this is my take and is, perhaps correctly, entirely delusional.

Starlight’s allegiance towards her belief system was in fact spur by, matter-of-factly, the distinction of Sunburst from her as he gained his cutie mark first, in canon. And that’s all we knew of it, but consider if this is you and that one social event that is entirely out of your control has thrown you out in a spiral that tossed you to fight harder for what you think you deserved - but went on a hostile turn of thought. Emotionally driven. Yes, we know how things go when political leaders assert the beliefs that will greatly discourage society as a whole and in an international scale, which takes time to prove, unlike the simplistic, 44 minute nature of MLP specials. At this point let us assume that the other choice is, all risks considered equal, a measurable and objectively better choice that you didn’t take because your emotions and ego got the best of you. I will not entertain political diversity on my simple and naive argument right now.

Moving on, Starlight has legitimately realized her wrongdoings, again assuming that one side is definitely objectively and quantitatively a better option, and did decide to be a better pony. And she had a goddamn hard time to be a better pony. What broke me is the notion that she battles this with all her might - through her anxiety and legitimate reminders and legacy of her past mistakes. It’s fortunate that her past village (fun fact: I call it Arton just because!) and their residents have moved on past that stage. Because perhaps one can also assume the fundamental flaw that defines ponies: The common folk is rather gullible, and defaults in a cultural norm and value of providing forgiveness, consolation and kinship between ponies.

All of this legitimately allows the show to be a much simpler, much more harmonious assumption of the real world. But let’s generalize complexities and think of the MLP universe as the MLP universe.

All things considered, Starlight’s plight is definitely an internal struggle with herself - a fight between her inner voices that understandably has tied so fondly on her old way of thinking, all part in the behavioral metamorphosis. What you can argue against is that Starlight is given so much time to morph as a character - which is a blessing that is often poorly provided to already established secondaries. But as a sidebar, at least it allowed Trixie some room to grow as well, but that’s another story.

Now here we have a completely organic character - sans her overwhelming magical capabilities - trying to change herself. She is definitely identical to Twilight in her plight to learn magic and friendship. And she has a past to haunt her - and back her up. Each and every doubt, error and mistake she does - albeit sometimes tiring and repetitive, if not cringy - are probably crafted in a way that is very relatable. And I acknowledge that other characters did this too. Personally though, she’s the only one who touched me so well.

I cannot think of enough ways you can relate the past catching up to you to haunt you. One can forgive but may perhaps never forget what you do. And though you are a different person, your past may not be able to escape you. Especially in this time of age. This is the beauty that I see in this character. I acknowledge that you can do this with Trixie or Moondancer as well, or just bring Sunset in which has the exact same parallel attributes. But here we are.

As for why I have seemed to jump ship so abruptly from Twilight, despite proclaiming explicitly that they are, indeed, a very similar character in terms of the things they need to go through to be masters at their trade, and their unspeakable mastery of magic. But Twilight did not come from such a troubled past - she started off as a diligent student who disregarded social interactions, and had some of the greatest characters to push her to go beyond what she even thought possible, developing together. Twilight has ups and downs and Starlight does too, and they both are supported that characters with their own flaws to go through their ups and downs together or as singletons.

The sole differentiating factor is Starlight’s past mistakes.

This huge burden of responsibility for change and renewal, the incessant passing of remarks that reminds her of who she was, and most importantly, the fact that she herself gets into episodes where her past influences her again and again. And it’s all out of insecurity. She had no knowledge of what’s right or wrong until Twilight came along to wake her up and expose her fragile ego and insecurity. And raced to fix it to at first Sunburst with Twilight’s help. And relate her ego fragility with Trixie. When she put the Mane 6 in mind control and wreaked havoc, she was prepared to be unforgiven from actions she did out of insecurity for being thought of as inferior by Twilight. And she was prepared for all the consequences in the end. But fortunately the Mane 6 are too nice. She fought against everything she believed in in S6, and proved that she did better of it in the finale, and turned into someone who finally gained a grasp into how things are done - and became a pony that benchmarks and checks others on their insecurities. The episodes still exposes how fragile she is when it comes to expressing herself to others, while now being the receiving end of minor or major social mistreatments. But she went through it all.

The capstone of her journey is how she became the voice of reason to Twilight and the Legends. For two seasons, she has developed into a character one would not necessary want to expect when they see her in the S5 premiere. Is she a fully matured character? Probably, we have two seasons to find out if my rant bears any more weight, but from what I see, she has faced some of the most realistic struggles battling with one’s ego, emotions, insecurities and emotion. In order to be a better person. Transformation from her past was something she never takes lightly, and her taking great insult to the Pillars noting how evils identical to her past being irredeemable proves her change. She strove to advise them to change their ways anyway - because she fought that battle.

In summary, Starlight’s journey has provided one of the most realistic, relatable arcs noting life’s greatest struggles - especially if one has done wrongdoings that has no significant merits - and admits to it. And wants to change for the better of oneself. This is the magnum opus of this character, and while this same story can be conveyed by Sunset, sadly her role is on a fork of the franchise, but I’d assume I’ll have the same rationale with her as well.

The differentiation of my preference between Starlight and Sunset is purely personal and is the most controversial piece of this thread - I still can’t bring myself to like EQG, as I can’t bring myself to watch more human depictions in cartoon. MLP is fable, but is illustrated in a universe that is believable and consistent, yet allowing things to bubble in its lore without completely illogical stances. It’s a masterfully crafted universe where the context isn’t absurd, or always pulled to the extremes. As for EQG, again, I came to the show for ponies, their style, their land, their lore, and their adventure. Had Sunset been Starlight in the show, I would have had the same correlations with her - simply because admittedly both characters has been through similar development arcs.

But at the end of the day, this is solely my opinion and how I feel. I understand that I cannot entertain everyone’s rationale on her, and neither do I want anyone to agree off the blue. Disagreements are welcome, and if you have anything to add or interject, please do. These are my reservations to Starlight, and if you have anything against it then perhaps opening a constructive dialog will make me understand other characters better - and perhaps also objectively reconsider my stance on the character.

All that said, I love her because she fought to change against all of her odds, and have failed and tried again through means that made her a respected character for her flaws and her journey to fix it. And to come out of that fight wise enough to help others too. I’m proud of Starlight Glimmer, and I can’t express my gratitude towards the writers who had morphed her character through a believable emotional turmoil. And like Twilight, the dorkiness and cuteness are gongs and horns to an entirely solid character by her own. I’m proud of my little Mimi, and her long, arduous journey to be a better, wiser pony who is nothing like her past.

Because that’s what makes her the great, strong pony she is. 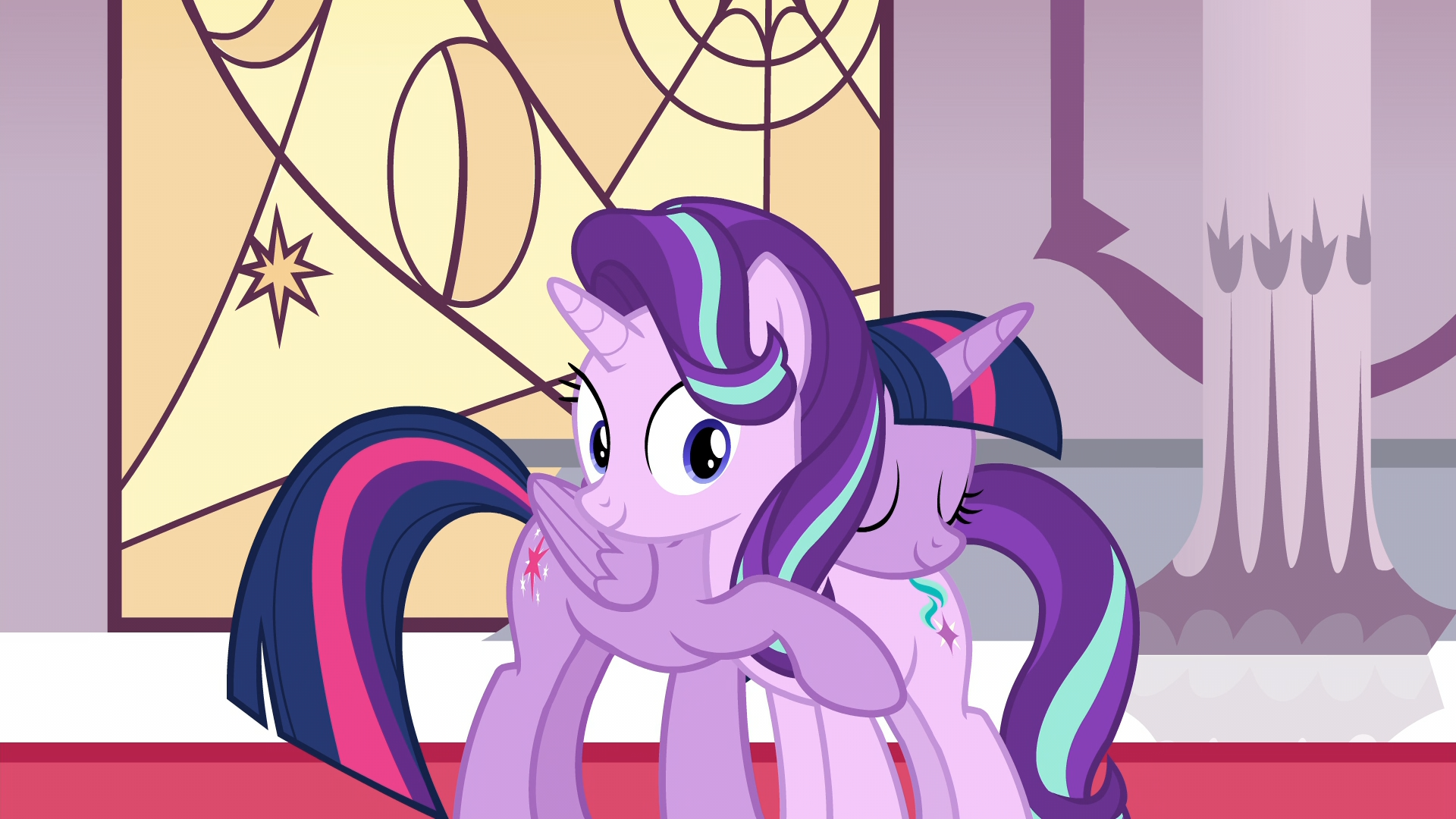